With our “End of the Year” lists now completely wrapped-up for 2013, I can’t help but feel like a few acts were unrightfully snubbed completely from our artists, albums, and songs lists. This is natural since we clearly can’t just list everything we like, and with three of us voting, we also won’t all be voting on the exact same things. So for this week’s LxListening I thought I would list some of my honorable mentions from 2013 that didn’t get much pub from us in our end of the year lists, but are still being consistently played by myself. So without further ado, in no particular order, here is my attempt to clean up some of my list misses from 2013:

King Khan and the Shrines – “Born To Die”

King Khan and the Shrines are quite an interesting and eclectic bunch. Their 2013 effort Idle No More seems to be their best attempt at imitating fellow contemporaries and friends The Black Lips. Although the album does have some down spots here and there, it also has some gems such as this opening track to the album here.
END_OF_DOCUMENT_TOKEN_TO_BE_REPLACED 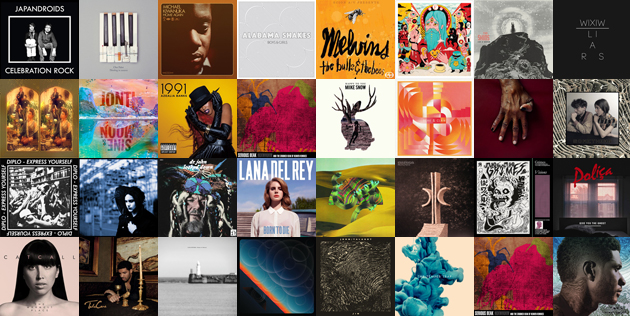 2012 turned out to be a pretty great year in music.  I think all three of us would agree the offerings in 2012 were deep in really good albums, without many albums rising to the level of true greatness.  That being said, I think I would rather have a pool of 60-80 really good albums come out in a year than 9-10 great albums.  Around here, we like variety, and we certainly got it this year.  There was a surprisingly surge of good hip-hop released in the second half of the year (Killer Mike, Nas, Meek Mill).  There was the long-awaited return of all-timer female singer songwriter types (Fiona Apple, Cat Power, Regina Spektor).  And there were also several much-anticipated sophomore wide releases (Sleigh Bells, Tame Impala, Beach House, Twin Shadow).  All in all, there may not have been a lot of perfect albums this year, but it was still a great year in music.  Enjoy the top 20.
END_OF_DOCUMENT_TOKEN_TO_BE_REPLACED

Last year, EMA, Cults, Yuck, and A$AP Rocky headlined our list of best new artists.  For the most part, the break out artists of 2011 toured to support their 2011 material in 2012, hitting the festival circuit particularly hard.  And by the stipulations we determined this year, a couple of the artists wouldn’t have even been eligible (The Weeknd & A$AP).  For this year’s list we explicitly only allowed artists who released their first proper studio album within the calendar year, unfortunately disqualifying artists such as Grimes, Ab-soul, and Schoolboy Q.  In addition, previous mixtapes do not prohibit an artists eligibility, allowing Frank Ocean and Meek Mill to be eligible despite extensive previous exposure.  These guidelines were not decided on lightly and may be changed for future lists, but we wanted to define this category as narrowly as possible.

Its debatable whether this year’s crop is as strong, but there have been plenty of new artists to break onto the scene.  Several artists of note also missed the list, but you’ll just have to hit the jump to see who.  Enjoy, and as always, let us know who we omitted, forgot, or shouldn’t have included.
END_OF_DOCUMENT_TOKEN_TO_BE_REPLACED

It is a little over halfway through 2012 and a large breadth of music has been released in this time.  This of course means that it is time to list what, in our opinion, are the best albums so far this year.  We do this not to proselytize our readers into congratulating us on our superb music tastes, but instead to evaluate the current musical landscape.  Today’s list will also provide some loose guidelines for when we do make our end of the year list – although it is merely a predictor and not definitive on how we will feel at the end of the year.
END_OF_DOCUMENT_TOKEN_TO_BE_REPLACED