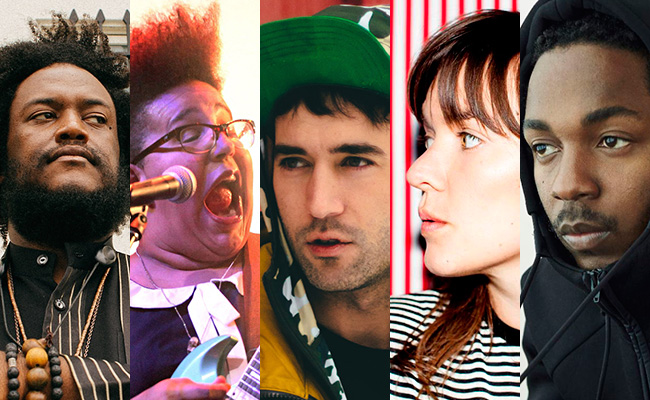 We may be running a bit behind already in 2016, but better late than never. Here is what we at LxL agreed were the top tracks of 2015:

20. Alabama Shakes – “Don’t Wanna Fight”
From the moment Brittany Howards screeching intro to beers into your ears, you can feel in your bones that this track is going to be great. It does not let down one bit throughout either.

19. Baio – “Sister of Pearl”
Chris Baio of Vampire Weekend led his album with a bright and brilliant homage to Roxy Musics brilliant 1973 single, “Mother of Pearl”.

17. Jason Isbell – “The Life You Chose”
Jason shines with this track as one of the better modern country artist of our time.

16. Unknown Mortal Orchestra – “Extreme Wealth and Casual Cruelty”
UMO’s most valiant and serious effort on an album that is full of 9 near-perfect tracks.

14. Titus Andronicus – “Lonely Boy”
A true Titus tack if there ever was one.

13. Vince Staples – “Summertime”
Aside from Kendrick, Vince probably put together the best lyrics of 2015 in his debut LP, Summertime ’06. The title track helps back that statement.

12. Vince Staples – “Lemme Know”
A unique, and chilling song. You feel this song in your heartbeat and soul. Our favorite from the album.

Viet Cong came out the gate screaming with their debut album in 2015 with “Silhouettes” being their leading and fiercest single.

Ought’s 2015 effort was a fresh and powerful avant garde masterpiece, overlooked by many. Be sure to at least catch the opening track which served as a fun single from the album.

Kurt Vile’s mantra seems to be to take it easy and never take life too seriously. This bouncy jingle helps show exactly that.

Listen once, it won’t leave your head for days.

Grime’s hardest punch from her dominate 2015 album Art Angels. (Ok, maybe “Scream” is a harder punch, but both are phenomenal tracks)

Sufjan really tugs the heartstrings with this quietly terrifying tear jerker. A prize of a track from his deeply personal 2015 album, Carrie & Lowell.

Knowing now what Bowie was going through while writing this song, along with the fact that it is a near 10-minute jazz infused masterpiece puts it up there with one of the greatest singles ever released.

Just listen, and let it happen!

Play this song anywhere, and anytime, and I promise you there will be good times had. That’s an LxL guarantee.

This track is the best of Courtney. A funny, intelligent, grungy, driving force of a song that is poignant as it is clever.

One of my favorite DG songs yet. This track sounds like a modern version of a NIN track with its sonic swirl of doom minor keys crossed with the furious lyrical venom that only MC Ride can really spit.

I am really surprised more Grimes songs didn’t make our list. Thankfully Austin his part in getting her one more mention.

Honestly, how could anyone not love this song?