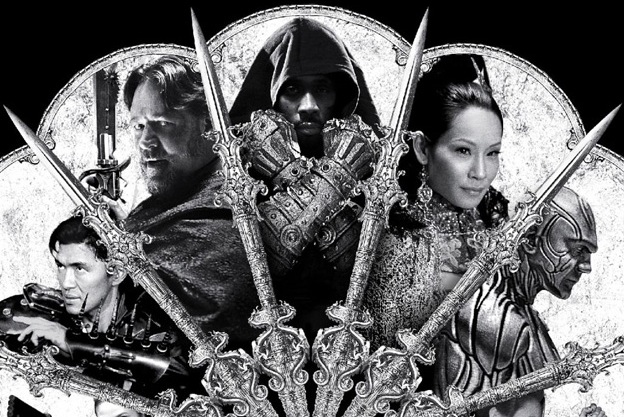 Two weeks from today will
mark the glorious directorial debut of Wu-Tangs one and only RZA.
November 2nd, we will be hit hard by one of the most over the top
kung fu movies to be released in the US in many years,
The Man With the Iron Fists. Produced by
Quentin Tarantino and written by Eli Roth and RZA, it has an
instant draw if not only marked purely by curiosity. As over the
top as it comes off in the trailer, I can only imagine how
ridiculously awesome the entire hour and a half will be. Although
RZA is certainly no stranger to the film world, this is the first
time he has written or directed anything. The fact that it was
co-written by Eli Roth ensures maximum blood and gore. It should be
a real eye gauger. Perhaps the biggest bonus you get with having
RZA so heavily involved with a movie is that you are graced with a
killer soundtrack, and judging by the album’s full track list that
is exactly what we have here:

Rumors have it, there will be
a full 2 LP box set that will include the film’s full score as
well, which may ultimately prove to be the greatest hip hop effort
put together this year. Below are some of the stand out tracks that
I have heard thus far that have all been on heavy rotation for me
this past week. One thing is for sure, if the movie is half as
entertaining as the music, movie posters, and trailers our leading
us to believe, we are in for one hell of a show. Prepare to be
bitch-slapped by the man with the iron fist. ; “Tick
Tock” – Pusha T, Raekwon, & Joell Ortiz

Pusha T has had quite the year thus far, and his validity will only
rise with his presence on this soundtrack. Raekwon dominates as
usual, but saves his knockout verses for some later tracks. A
common theme with this albums sound is the haunting and heavy use
of reverb on the guitar tracks. Reminiscent tones of the Blakroc
album in which RZA collaborated on with the Black Keys as well.
With neither the same tone nor the Black Keys being absent from
this album, I think it is safe to say RZA liked the Blakroc method.
; “Rivers of Blood” – Wu-Tang Clan & Kool G
Rap

Wu-tang is back in action. Again with the Raekwon, but he’s just
too good to not shout out. He owns this track right out of the
gate, but Ghostface steps up the intensity that takes this track to
the next level. A good driving force of a song that will certainly
set the proper tone for a killer kung fu battle in the movie I’m
sure. ; “Built For This” – Method Man, Freddie Gibbs,
& Streetlife
One of the
most straight forward, yet lyrically dominate tracks off the
soundtrack. It still has some of the Black Keys-esque guitar tone
sprinkled in here and there but the driving force of this track is
the funky bassline that pops like an Issac Hayes track. This song
is pure hip hop and drives home the fact that Method Man tends to
be an all-too overlooked member of the Wu, and that Indiana doesn’t
produce any slouches. Hailing from Gary Indiana, Freddie Gibbs
proves he can hold his own when featured amongst the Wu. ;
“White Dress” – Kanye West
Kanye’s
contribution doesn’t completely dominate everything it surrounds
like it usually would, but it almost does. Kanye spits some of his
most potent venom of the year over the old school vibe that is
backing the track and sounds as sexy as a Marvin Gaye tune. The
only thing that doesn’t make this the baddest song on the
soundtrack is the next song. ; “The Baddest Man
Alive” – The Black Keys & RZA
Call me
biased, but I admit I have a terrible sweet spot for total rock/hip
hop fusion. Not only in respects to heavy rock instrumentation
backing a rapper go off, which is a prominent theme on this
soundtrack, but especially in songs like this when the two are
completely fused. The Back Keys obviously have a knack for this and
this song as well as the rest of the soundtrack making me
especially anxious for Blakroc part 2. ; “Six
Directions Of Boxing” – Wu-Tang Clan

My favorite of the bunch. Nothing insanely fancy. Just a solid back
track with some funk beats, haunting guitar notes, and mad flow by
U-God, Ghostface, GZA, Masta Killa, Cappadonna, and Inspectah Deck.
Reunited and it feels incredibly bad ass. Well done RZA and the
rest of the gang. I hope to enjoy the film half as much as I am
already enjoying the soundtrack. I am sure I will. 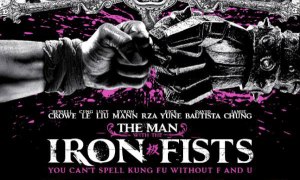 2 thoughts on “LxListening: The Man With The Iron Trax”