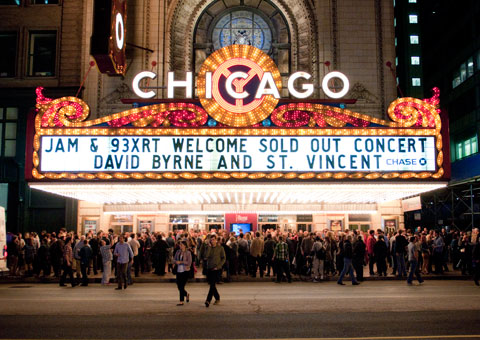 It’s pretty much a foregone conclusion: supergroups and high-profile collaborations rarely live up to their billing…on record. On stage, there is nothing more electrifying than seeing your favorite artists join forces on stage for an overwhelming level of talent. Whether it was Oysterhead, Monsters of Folk, or Kanye and Jay-Z, every high-profile collaboration I have seen has left me knocked out on the floor wanting more.

Of course, the combination of one my favorite female artists today in St. Vincent (real name Annie Clark) with the lead singer of one of my top 5 favorite bands of all time in the Talking Heads was too good to pass on. The two released their debut together, Love This Giant, a week before the show; an album that is unique unto itself in sound and is pure joy to listen to.

The two have some similarities but also very clear contrasts that help this project work so well. David Byrne has made a career out of being peculiar, paranoid, and playful not to mention progressive; Talking Heads and David Byrne himself have released some of the most groundbreaking records and live shows of the 70’s and 80’s. If you have never seen the Jonathan Demme-directed concert film of the Talking Heads, Stop Making Sense, you will be a more joyful person coming out the other end of it. Now combine Byrne’s bright musical ideas and brainy cultural commentary with St. Vincent; a mousy Texan and a sweet voice on the surface, but her music is a boiling cauldron of darkness and noise below the pretty surface. Thus you have two eccentric showmen with a knack for American cultural commentary at different ends of the age and style perspective (Byrne warm and funky and Clark dark and dramatic) making a dynamite recipe for an interesting show. Throw in an 8 piece horn section consisting of both classical and jazz musicians to spice up the deal, and you have one funky good show.

The duo opened with “Who” and “Weekend in the Dust”, the opening two tracks off of Love This Giant, getting the crowd warmed up with faithful but perfect sounding renditions of these two songs. While it was fun to see the songs from their collaboration album, Love This Giant, the real highlights were when the two played their own respective songs since hearing these songs played with an 8 piece horn section and each harmonizing with each other brings out an entirely new side for many of these songs. “The Party” was already St. Vincent’s most utterly beautiful ballad but hearing this song with the pulse of an 8 piece horn section with Byrne’s voice joining Clark for the finish was truly something special to hear.  St. Vincent’s “Cruel” and David Byrne’s “Lazy”, songs that were already sneaky funky, were made that much undeniably funky with this supreme horn section playing support.

Movement is a huge theme of Love This Giant, as the music moves the story along with each honk and blast of the horns. The live show was much the same, with Byrne utilizing the same play with shadow and light that he so famously used with the Talking Heads to help dramatize the constant movement of the members of the band and add extreme detail that he put into curating and choreographing the show. On the menacing “Marrow”, Clark stood mid-stage as her large looming shadow grew and withered based on where she moved and the horn players split each side of the stage, starting on opposite ends of the stage and slowly moving almost as to attack her as the music grew larger and darker. On the glitz and gloom of “Cheerleader”, the entire band laid or sat on the stage as Vincent again ruling the crowd and showing why she should never be a side pony (or cheerleader) anymore. “The Forest Awakes” plays like a Snow White nightmare and the movement on stage matched it; the horn players hurried frantically around stage like an unsettled forest, as Byrne very creepily (and humorously) ran around stage stopping in front of others just to stand motionless and stare into their eyes. The first time I saw St. Vincent was opening up for Arcade Fire in the very same theater, and the promise she showed 5 years ago in that  surprising opening set has now been truly realized on stage and record.

And just as great as this new take on old classics was Byrne himself. Out of all of the music legends I have seen, maybe no one’s voice has held up as well as Byrne’s, with him virtually sounding the same as he did 20-30 years ago. This especially stood out on “Outside of Space & Time”, one of my least favorite songs on Love This Giant, and Talking Heads’ timeless love song “This Must Be the Place”, which showed Byrne as clearly still on top of his game. Few if any musicians display the sort of shameless showmanship that Byrne has, relentlessly entertaining the crowd with any dance move, odd gesture, or vocal hiccup. Yet he does it with pure class and what feels like a true sense of joy and appreciation.

I couldn’t more highly recommend catching these two (or one of the two if you miss this tour) in a city near you. It’s rare to see a show that is visually, audibly, and emotionally so striking. They no doubt will burn down the house.

3 thoughts on “David Byrne & St. Vincent: Burning Down the House”