To finalize our week de la Bonnaroo, we give you our final breakdown of the festival written by the third member of our 2012 Roo-Crew and very good friend Riley Johnson. This was Riley’s second year at Bonnaroo and is a great addition to the group, even if I did get him sick halfway through the weekend. So here you have it, our final installment and our most expansive breakdown yet, summarizing everything we saw. Enjoy:

I was a Bonnaroo “newb” last year. Food poisoning, sun poisoning, and extreme chaffing attacked me like a rampage from Attila the Hun. However, I experienced so much musical bliss that it could not deter me from my second go around this year. Better prepared and eager from an amazing schedule, I came to Roo as gleeful as Ralphie hastily unwrapping his Red Ryder BB gun. Instead of giving you my favorite show (obviously that goes to the most beautiful woman on the planet Santi White) or my hippie breakdown (man I love hula hoops and tie dye), here is my one sentence take on every act I saw over the 4-day tidal wave known as Bonnaroo: 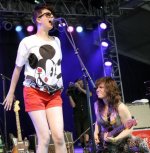 EMA
I’ve haven’t felt this sad since the hospital cut my Superman shirt when I was 2.

Danny Brown
Not many people know him, they soon won’t be able to live without him.

Best all boy duo I have heard since Milli Vanilli.

Yelawolf
I love when rappers press play on their iPods for 20 minutes in the middle of a set.

Alabama Shakes
Please tell me how in the world is Brittany Howard only 23?!

tUnE-yArDs
The fact that Merrill Garbus does not mess up on a single loop astounds me.

Sharon Jones and the Dap Kings
Soul definitely gets better with age.

The Avett Brothers
I’ve never understood why bands with “brothers” in the title can get away with having people in the band that aren’t all brothers.

Ludacris
Thank you for 90 minutes of straight partying.

St. Vincent
Spent half of the show hearing Todd and Wes argue over if she was sexier than Feist; well worth it.

Black Star
Talib Kweli and the artist formerly known as Mos Def are a better duo than Ace & Gary.

Flying Lotus
Craziest 10 minutes of my life to start the show.

I’ve never heard a group so awkwardly sound so good.

Santigold
Mark my words, she will marry me someday.

The Roots
After seeing them live, Black Thought is the most under appreciated emcee in the game.

Dispatch
Even though they are making a comeback, it was still nostalgic to dance to “Elias” and “The General”.

Red Hot Chili Peppers
I couldn’t help but always wonder,”Who is that guy in Frusciante’s spot?”

Superjam
I wish D’Angelo would have worn the same outfit he did for the “Untitled” video when he performed.

GZA
I will never forgive Todd for getting me sick.

The Black Lips
“This song goes out to the guy that fake slept so his buddy could get it on next to him in the tent!”

Mac Miller
I thought Wiz Khalifa was the highest person I ever say perform; I was wrong.

The Antlers
Thank you Wes and Todd – they were my great new find of the weekend.

The Civil Wars
I would have sold my soul to the devil for a cameo from Taylor Swift on “Safe & Sound”; god she better headline Bonnaroo 2013. 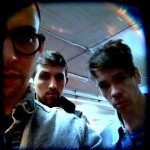 fun.
If we are young tonight every night does that mean we will never die?

Phish
Glowsticks and hippie dancing make for a better trip than any drug can ever give you.

In closing, thank you Bonnaroo 2012. The consistency and diversity of your line-up did not disappoint and I look forward to our 3rd date in 2013.