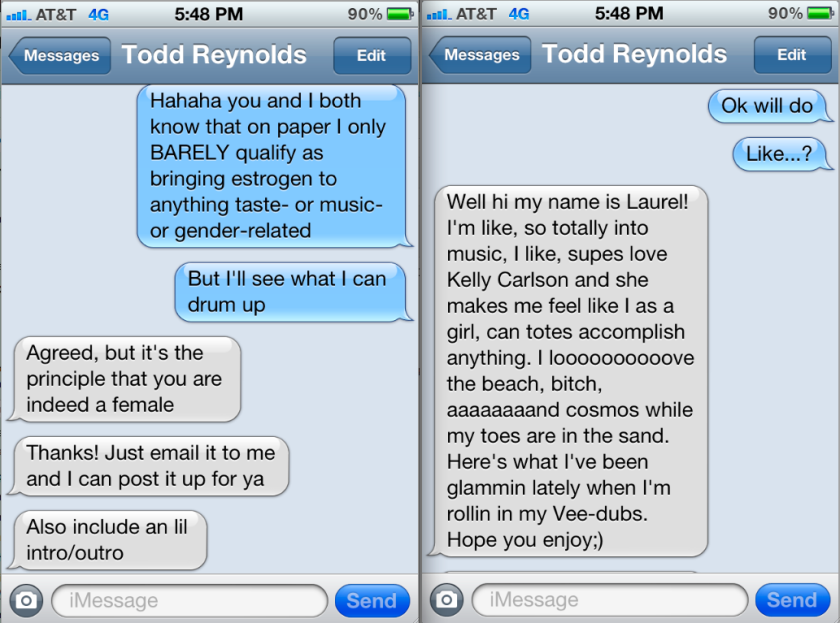 ^^ I also watch The Bachelor

LxL patriarch Todd has been politely hounding me for a few months now to add my particular brand of musical discernment to the pages of Little by Listen. And let’s just lay the truth bare while we’re all gathered here today and acknowledge that the most important ingredient I bring to this Bitches Brew is, in fact, estrogen.

I’ve been resisting months of Todd’s earnest attempts to squeeze critical water out of this rock, and the reasons for this are twofold. Primarily, whatever seems to be happening in my preferred little corner of the music industry (otherwise known as Pitchfork’s Lapdogs) is about as exciting to my ears as a cavalcade of up-speaking twenty-somethings at a bachelorette party.


Right? Call me a curmudgeonly old codger,* but if I have to hear another whining sack of Millennials yapping into their bedroom microphone about how getting high in the summertime of nineteen eighty-never is the best thing about life, I’ll politely demand that all y’all get the heck off my lawn.

Speaking of that, I suspect the second reason for my musical disenchantment is because, quite frankly, at 29, I’m not getting any younger. I have no more time to waste sifting through the cultural chum bucket looking for a decent bit of bait for my musical appetite than I do watching TV shows like Whitney in the hopes that they’ll find their footing by season 2. I’m bored. And I don’t like having my time wasted by a band whose peripheral artistic contribution to the Aughts is a name boasting vowel removal (and no, VWL RMVL, writing it in all caps doesn’t make it any less inane).

That said, I can’t help but love music. It’s an enormous and interwoven part of my life, so like it or not, I’m beholden to the very industry I’ve spent the last two paragraphs maligning. Did I mention I live in a glass house? No? Well, please take a moment to appreciate my growing collection of rocks on the mantle. I may not have anything particularly new or exciting to gush over at the moment, but for what it’s worth, here are five songs enjoying a heavy rotation in my headphones lately.

*Just kidding, don’t. I’ll throw my tumbler of whiskey in your face from my seated position in my tufted velvet gentlemen’s chair in the dark corner of my poorly lit regal library in the west wing of the Old Man section of my mind.

I can only imagine that having a parent famous for a particular talent casts a long shadow on an offspring short-sighted enough to pursue a similar endeavor. (See: Jakob Dylan.) Nepotism certainly plays a role in the proliferation of Jr.’s pursuits (see: Jagger/Richards descendants), but it’ll only get you so far. Sometimes, you can’t argue with talent any more than you can trot out the tired argument that familial connections are to blame for whatever flaming embarrassment so-n-so produces (see, ahem: Nicolas Cage’s hairline, career choices, anguished stare).

Having said that, Wilco progeny and blogging wunderkind Spencer Tweedy’s rollicking jam “Rushmore” has been getting more attention from me lately than Whatever Came After A Ghost Is Born. It’s the best song Wilco never wrote.

Before Vampire Weekend co-opted wry social observations and Afro beats, there was Paul Simon. This demo version of the Still Crazy After All These Years counterpart boasts all the components of a song that lights my heart on fire: handclaps, harmonies, and hope.**

**Just kidding about that hope part. Give me an anthemic paean to youthful optimism and I’ll give you a swift knee to the ya-yas.

Speaking of alternate versions of our favorite jukebox classics, The Talking Heads’ “Psycho Killer” is one of my go-to tracks for knocking back a few at Local Dive Bar USA. But there’s an acoustic version of this track floating around featuring postmodern cellist (and alleged Ginsberg paramour) Arthur Russell utterly tearing the countermelody a new one. My interest was piqued and what I found was an oeuvre of work belonging to the late musician proving once and for all who the Dirty Projectors owe their inspiration to.

I may or may not have fallen victim to the feathers-in-the-hair trend also known as Boho. It was a long time ago, okay? And it was a different time. We didn’t know Urban Outfitters ripped off their designs from Etsy innocents, and our Moongoddess Muse Stevie Nicks told us what to do.

Gauzy layers, quoth she. “How many?” We implored.

Feathers! Facepaint! Victorian lace! She bellowed. We cowered in a mixture of awe and terror. And then we clutched our fringed bags to our breasts and ran to the nearest Anthropologie where we bought flower headbands and beaded scarves.

They were different times, as I said.

Even though I’ve generally pared down my sartorial flights of fancy to a rare and sparingly donned bit of velvet, I still pay an occasional visit to the bright altar of NICKS COMMA STEVIE in the form of Rumours.

Because let’s be honest: If the contents of my heart were shown the light of day, they’d look the way this song sounds. So while I might be a welcomed injection of Feminine Intuition to this gentlemen’s club, I can’t promise I’ll be warbling the praises of Kimbra or Taylor Swift anytime soon. Sometimes, bad is just good. And nobody does bad better than Tom Waits.